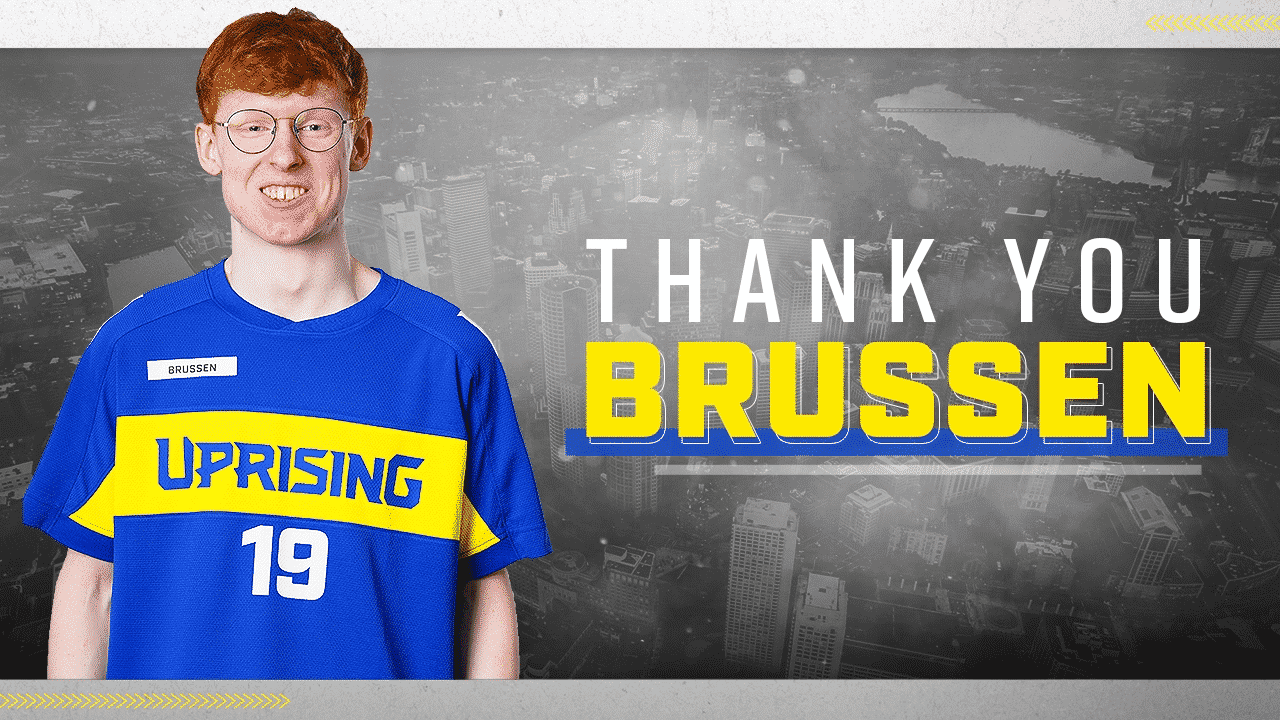 Brussen’s departure comes during a difficult time for Boston Uprising, who have already parted ways with DPS Sangbeom “Munchkin” Byun, Support Gabriel “Swimmer” Levy and assistant coach Ilias T. “iLka” Kaskanetas since the beginning of March, while Minseob “Axxiom” Park took a leave of absence due to medical procedure.

While losing three members of the team in only two months is a huge blow for any organisation, Boston Uprising have already filled the holes with the acquisition of Support Kobe “Halo” Hamand, and Tank Leyton “Punk” Gilchrist, with the latter signing a contract with the team earlier on Monday.

Halo and Punk have joined Kelsey “Colourhex” Birse, Cameron “Fusions” Bosworth, Sang-min “Myunbong” Seo and Tae-hee “Jerry Min at Boston Uprising’s, meaning Boston are operating with only six members. Although Overwatch League rules previously stated each team needs to have a minimum of eight members on the roster, the number was reduced to only six, due to the COVID-19 pandemic, which caused many teams struggling to keep their rosters intact.

Brussen has begun his Overwatch career in May 2017, when he made his first appearance in a competitive environment at Go4Overwatch Europe Cup #49 with Dolphin Squad. The Dutch Tank continued competing in some lesser tournaments throughout the whole year and into the early months of 2018, before he got picked up by Freefall in March 2018.

With Freefall, brussen won Go4Overwatch Europe Cup #95 and later made it to the semi-finals of Go4Overwatch Europe Monthly Final – March 2018. His stay at Freefall, was, however, short-lived as brussan ended up leaving for One.PoinT barely three weeks later. During his six-month sting with One.PoinT, brussen finished third at Open Division 2018 Season 2 – Europe and Overwatch Contenders 2018 Season 2 Trials: Europe, while also pocketing a top-eight finish at Overwatch Contenders 2018 Season 2: Europe. In September, the Dutch pro made his first appearance for his national squad and finished third at Overwatch World Cup 2018 – Paris Qualifier.

Brussen left One.PoinT in October 2018 and has since played for Bazooka Puppiez, returned to play under Freefall between March and May 2019, Young and Beautiful and Angry Titans. In November 2019, he once more represented the Netherlands national Overwatch squad at the Overwatch World Cup, where he helped his nation finish fifth-sixth. His impressive performance at the World Cup eventually earned Brussen a spot in the Boston Uprising, who decided to offer him a contract two weeks after the World Cup concluded.

During the 2020 Overwatch League season, brussen was called up for the Uprising’s starting off-tank position after the team parted ways with Walid “Mouffin” Basal, who was released from the team following sexual misconduct allegations and while the Dutch player had huge shoes to fill, he performed admirably well, although Boston Uprising failed to see much success in their competitive endeavours since they won only one match so far this season out of 11 played.

“I’ve decided to take a break from Overwatch. I’ve thought about it for a while and it’s been a hard choice, but it is what is best for me right now,” said brussen in his announcement.

“It’s disappointing that I couldn’t represent The Netherlands better, but I’m sure there will be new Dutch talent in the league by the time the 2021 season rolls around.

“I want to thank Boston Uprising for the opportunity and everyone from the organisation for helping me. I’m going to miss the guys and wish them good luck in the remainder of the season. They’ve had a really tough season and I hope things turn around, they deserve better.”

With that, Brussen ended his career as an Overwatch professional player. While he has not unveiled what his plans are for the future, he has stated that he will “been enjoying VALORANT,” while he decided on his long-term plans.